Following the rescue operations in early January there was, understandably, some damage to the fell from accessing Lancaster Hole. The RRCPC  organised a day to remediate this and, following a call for help, 14 cavers from RRCPC, York Caving Club, CDG and individual cavers turned up at the farm early on Sunday morning. As the land is fairly boggy, the ground had been churned up and there was some rutting to areas of the fell.

It was a beautiful day on Casterton Fell, the ground was hard but it did not impede our work. With many hands the remediation itself was done very quickly and involved smoothing out the rutted areas and filling in or raising the areas with forks where hollows had occurred. A big thank you to everyone who helped out. Now we just need to leave it to nature to do its part.

The fell is very wet and soft in this area and is therefore prone to damage by any form of access across it, including by foot. People accessing Lancaster Hole via this route would cause either further churning of the ground or widening of the damage as people attempt to walk around the heavily boggy areas.

Please can we ask people to access Lancaster Hole via the path that follows the wall. The drainage here is a lot better and it will be less likely to become boggy. As part of the conservation works we have marked the pathway with stakes and reflective tape.

Many thanks for your assistance.

(2) The damaged area at the start of work

(3) The same area after the remediation work. 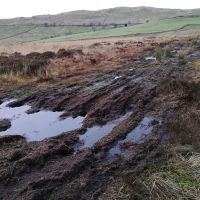 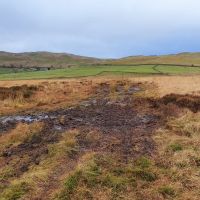