Great to see that some cavers have been using their time since lockdown measures were eased, to perform cleanup works at some of our most popular sites.

Mark Sims reports on their efforts to clear out Brown Hill Pot in Kingsdale:

Back in early 2020, three of us had an enjoyable trip down Brown Hill Pot, but were a bit disappointed to see the large amount of kit down there. It was rigged minimalistically for an ongoing project (fair enough) but someone had seemingly added additional metalwork, meaning there was little room in the P-anchors for anyone who would rather use their own gear. Unclipping the karabiners from the anchors temporarily wasn't an option because they had been in there for a sufficiently long time that they were corroded shut.

The last pitch in particular was a total mess, with two tatty knotted lines rigged from a thread, and two further ropes rigged from the anchors. One of these ended about 3 m off the floor and the other had a lengthy damaged section trailing towards the sump. We removed the damaged section and de-rigged the too-short rope as these presented clear safety hazards for other cavers. Despite our attempts, none of the metalwork yielded so we had to leave it in place.

Come spring, our efforts clearing out what we could from Brown Hill Pot, as well as some rubbish removal from Newby Moss Pot, had earned us the donation of a tacklesack from the Not For The Faint Hearted conservation fund, which was gratefully received just in time for lockdown.

After the lifting of restrictions it seemed only fitting that the first outing of the shiny tacklesack should be a trip to collect some old gear. The huge amount of junk in Newby Moss would have needed a reasonable sized team that wasn’t especially compatible with restrictions at the time. However, Brown Hill Pot seemed ideal, as it could be tackled with a smaller team.

Armed with mole grips and a hacksaw, we enjoyed a smooth and socially distanced trip down to the last pitch, where we started rationalising the bundle of fat rope that hadn’t fitted in our tacklesack last time. The mole grips made short work of the rusty krabs, so we moved up to Puits Ian Plant. Thankfully, the surplus karabiner on the deviation yielded from a couple of blows from the mole grips, and the extra karabiners at the pitch head also didn’t put up too much of a fight.

Between Puits Ian Plant and the next pitch we added some foul-smelling plastic sheets and some cable to our haul, before setting about removing the last of the extra metalwork when we reached the pitch head. Those familiar with this pitch head will know it is not the most spacious of places, so it wasn’t straightforward, but after a lot of effort the two useless maillions and two obsolete hangers were removed. We made our way to the entrance with much heavier bags than we went in with, pleased to have left the cave in a far better state than we found it.

Our thanks to Mark and the small team involved for their proactivity in helping to conserve our caves. An excellent effort! 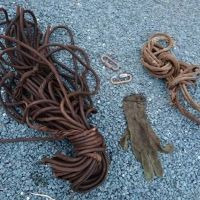 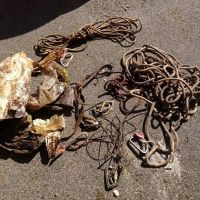