Back in December, the CNCC received a report of stability issues with the entrance to Knacker Trapper Hole near Chapel-le-Dale. This quirkily named, more challenging cave has gained much popularity since inclusion in the excellent ‘Not for the Faint Hearted’ guidebook, particularly owing to its relatively minimal amount of tackle required to descend to its full depth.

Chris Scaife picks up the story:

Knacker Trapper is an excellent cave that I have visited several times before. Some slithery squeezes in the entrance series lead to a high, narrow rift known as University Challenge, which is awash with enjoyable climbs and traverses. On the 7th of December 2020, James Carlisle had a day off work and I was delighted when he suggested a trip to the uncouthly named glory hole.

However, just inside the entrance we found that the first climb down – normally an absolute doddle – had become a whole lot narrower. Some large blocks had moved since I was last in there and had obstructed the way on. When testing to see if the situation could be improved, a large number of rocks started to move all around us, so we made a hasty retreat and notified the CNCC that the entrance was dangerously unstable.

A warning was issued and a CNCC conservation team quickly assembled. The first weekend of work was reported here: https://cncc.org.uk/news/20201220-knacker-trapper-remedial-work

Chris elaborates on the first day of work:

Less than a fortnight later, on the 20th of December, I joined a team of Covid-compliant CNCC volunteers to work on stabilising the entrance. It was cold and rained on and off throughout the day, but the team carried on undeterred and made remarkable progress. The entrance pipe was replaced, as was the scaffolding – some of which had completely rusted through. A huge amount of loose rock was removed from around the entrance and the place became almost unrecognisable. My entrance photo uploaded on to the CNCC website a mere thirteen days earlier had swiftly gone out of date.

After the success of the first trip a smaller team gathered on 28th December with hopes of finishing off works that day.

Chris Scaife, Terry Devaney and David Matthews were unavailable for the second day, but thanks to them for their excellent efforts on the first session.

The Ranger was driven up with the tools whilst the rest of the team walked up. Andrew and Ged went back to the Hilux with the Ranger to bring up the 2m X 600mm twin-walled pipe for the entrance.

Whilst this was going on Russ set to work and ‘chamfered’ some of the protruding bedrock to make room for the tube to sit down on the bedrock ledge. Fred then spent a while down in the entrance chamber doing some drystone walling to make the entrance to the squeeze safer.

Having tested the fit of the tube, all the temporary scaffolding and boards were removed and some of the old scaff was cut out as well. The tube was carefully located on the ledge and was back-filled round with rock to hold it in position. The soil from the spoil heap was added and then topped off with the turf from the original excavation. It was a well-satisfied team that packed up and returned to the car park.

On New Year’s Day, Frank Morgan (Natural England) and Ged Benn went up to Knacker Trapper with the Ranger and a quad with a timber trailer to bring back all the boards, scaff and rubbish from the hole. A scaffold bar was inserted into the top of the entrance tube to act as a belay and secured with clamps and a pre-made bat-friendly timber entrance cover was fitted. Everything was then taken back to Colt Park.

Thanks go to Frank for standing in for Andrew who was indisposed. It only remains for Chris Scaife, who initially reported this, to go and inspect the work to see if anything further is required.

The CNCC are extremely grateful to the conservation team for their efforts. Despite the additional challenges of Covid precautions, and some particularly foul weather, the job was completed less than a month after it was first reported. Thank you also to the 'Not For The Faint Hearted' fund for their contribution to the costs.

If you wish to become a conservation volunteer with CNCC, you can sign up on our website. 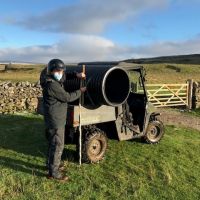 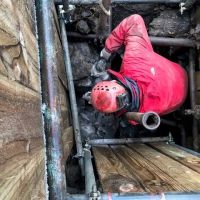 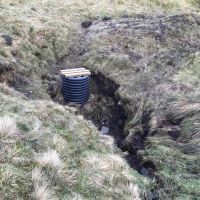