One of the largest breakthroughs of 2021 so far has been Mayday Hole on Dowlass Moss.

This pothole was catalogued in the old Northern Caves as being 39m deep, blocked after the third pitch. The team were able to pass the blockage and extend Mayday Hole to 120m depth, via some fine pitches.

Unlike some of the neighbouring potholes on Dowlass Moss (Trapdoor, Boggarts), Mayday Hole is a fairly spacious multi-pitch pothole. It is sure to prove popular, particularly as it is reported by one of the explorers to be suitable for wet weather conditions, and it is open access.

The exploration of Mayday has been beautifully described on UKCaving (click here).

With permission from the team once all exploration was complete, CNCC anchor installers set to work. Mark Sims and Toby Buxton completed the majority in just one day, working from the bottom of the cave up. However, at the top of the third pitch the drill batteries ran out. The following week, the job was finished by Gary Douthwaite and Matt Ewles.

A rigging topo is now available online for anyone considering a visit.

The entrance is easier to find than others on Dowlass Moss. Park on the Ingleton to Clapham high road just 30m east of where the Cold Cotes junction joins. At the top of the grassy slope there is a gate with an integral ladder. Follow the track gently up the hill for just over 1km. The track, now a little vague, then reaches a fork. Taking the left route and another 200m on, the obvious double shakehole of Bridge Pot is passed on the right of the track, and a line of shallow shakeholes is on the left. Mayday Hole is about 50m from the track along that left line of shakeholes.

There is an IC anchor in the limestone crag at the bottom of the shakehole to commence the rigging and a roof anchor just inside for the first pitch. About 5m down (do not descend to the floor) commence a slightly awkward and snaggy traverse to the Y-hang for the second pitch. From there, follow your nose... and the anchors of course!

Great work by all involved! 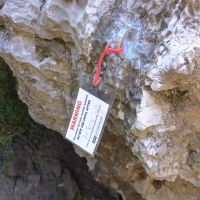