The Red Rose Cave and Pothole Club Conservation Officer would like to thank all those who turned for the Ease Gill cleanup on October 3rd this year. We managed to get masses of old digging gear removed and some very dodgy ropes. The Gour Hall team in particular were very tired by the time they surfaced having dragged loads of unwieldy gear through the crawls back to Mistral - Well done everybody! Some items of equipment were distributed as prizes to those concerned, donated by UK Caving/Natural England, to ease the suffering. The caves are now a little cleaner due to their effort so let’s try to keep it that way especially us ‘diggers’ who fail to go back and clear our old gear. We were going to return weren’t we? 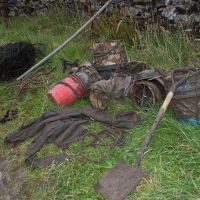