Following reports of broken and tattered tape in Witches II, Andrew Farrow, Dave Matthews, Ged Campion and Tony (Bog) Brown completed the necessary conservation work.  The team found the tape in poor condition but fortunately  there were no obvious signs of damage since the monitoring exercise conducted shortly after the cave was opened up to the non-diving community.

The biggest difficulty was making the pins secure as they usually grounded on rock before any depth had been attained, a situation that had proved problematic during the original taping exercise.  We overcame the problem by drilling small holes to a suitable depth.  We lost count of how many pins we used.  Out of the original 40 or so many were shortened to make two or three out of one.  Bending the end of the new short pins was achieved by drilling a hole in a stone and using the stone rather than pliers to exert sufficient leverage on the end of the pin to bend it to shape.

The task was bigger than expected and extended over two days but the sediments and formations are now much better protected and all old tape was removed.  The finished job looks good and the pins are much more secure than they were, plus of course there are quite a lot more of them. 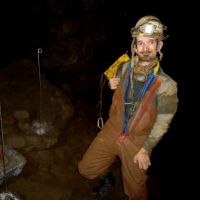 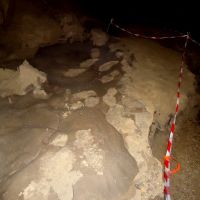 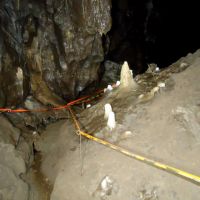