Report by Matt Ewles on the clean-up of Roaring Hole.

As a by-product of the trip to remove the PECO anchors from Roaring Hole in April (see separate article), Gary Douthwaite and I found ourselves surprised by the amount of rubbish down there, ranging from rotten wood, rusty metalwork, tatty ropes, plastic bags, buckets and other such nasties.

Certainly, Roaring Hole has seen its fair share of digging over the years to pass the various chokes; however, cleanup of the remnants of these efforts post-breakthrough was now decades overdue.

We decided that poor Roaring Hole, as well as new IC anchors, could also do with a cleanup. We recruited the assistance of our own club, the NPC, and a date was set for Sunday 5th August. A nine-strong team turned out on a fine warm day despite the abundance of red wine and cheese polished off in Greenclose the night before.

Gary, John Dale and I made a head-start and arrived at Chapel-le-Dale just in time to meet Andrew Hinde of Natural England (and CNCC Chair), who was able to take us and our several bags of hauling and anchor installing equipment most of the way up the hill; much appreciated!

Gary and I headed directly to the lower reaches of the cave to install anchors on The Rift traverse and The Slab climb. In doing so, we collected up a few abandoned scaffold poles, sections of broken pipe, three very tatty and badly frayed ropes and numerous industrial fertiliser plastic bags. These bags were everywhere; every corner we looked in there was an empty bag.

Meanwhile John tackled some of the rubbish abandoned in the stream passage below Bandstand Pitch, and the remaining six volunteers soon arrived and focussed on the upper reaches of the cave. The lion’s share of the rubbish was located in the large chamber just below the entrance and at the bottom of Bandstand Pitch. Using various hauling setups and sheer brute force they moved hundreds of kilograms of debris to the bottom of the entrance shaft.

On returning to the entrance after spending four hours further down the cave, we were reunited with the rest of the team who had now finished moving all the rubbish to the entrance chamber.

What then followed was a considerable group effort to pass everything up the shaft to the surface. The rubbish was then piled up by the side of the main Ingleborough footpath. The following day Andrew Hinde collected it for disposal and recycling.

The job took nine people around 6-7 hours each; an excellent ~55 hours of combined conservation work and a substantial contribution to the CNCC’s commitment to Stories in Stone.

The job was successfully completed, and Roaring Hole is now a much more pleasing place; not to mention a rather fine trip too.

This report also appears in Newsletter Issue 8 which can be downloaded from the publications page. 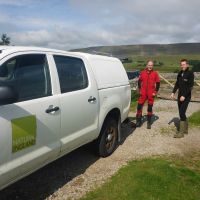 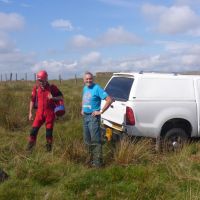 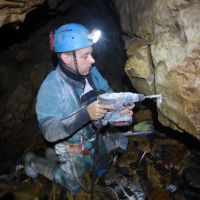 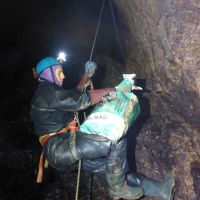 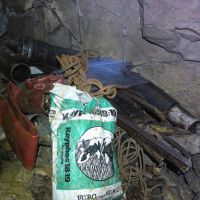