This short stream cave on the Ingleborough National Nature Reserve had a ramshackle cover of slate boskins balanced on tree routes and sky hooks. A health and safety audit on the Reserve ( by Kay and Edward Easton ) identified this as a hazard to livestock and visitors. Funding from the Ingleborough Dales Landscape Partnership ( Stories in Stone ) and expert labour from CNCC volunteers have worked over a 3 day period in May to put a new stock proof cover over the open rift entrance.

The new cover will survive 500kg cattle/cavers standing on it (hopefully). It looks a bit brutalist at present, but it will soon develop a thick covering of moss.

It has been suggested that it be re- named Patio Cave or Septic Tank Cave. Some further landscaping will ease it into the background.

Access to the cave remains a climb down at the south end of the Bunker.

All photos by Bog Brown 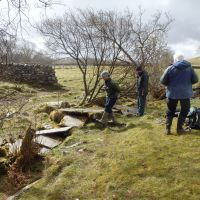 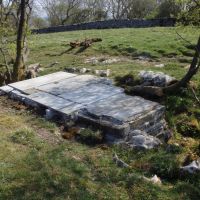