The Restoration of Gauber Pot

It was only in the 1970s that asbestos cement roofing panels were finally banned. There are still plenty of barns in the Yorkshire Dales clad with this potentially harmful material. Back in the days when people were less aware of the issues some of this material found its way into the shakeholes and cave entrances of the Dales.

A few weeks ago on the 8th August a team of 11 CNCC / Natural England volunteers were drafted in to help restore the entrance to Gauber Pot SD 766786 situated on Park Fell. Although it only has a depth of 15 metres it might have some potential. The only trouble is the entrance has been inaccessible for decades blocked by a huge amount of asbestos roofing dumped in less enlightened times. The first job was to remove the asbestos and then make an assessment of how best to make the entrance cattle proof. The team assembled on the 8th August and several members of the team kitted up in protective gear provided by Andrew Hinde, Cave Conservation Officer for Natural England.

Safety was paramount and everybody working near the covered entrance was secured by a safety rope. A long day’s work saw most of the asbestos double bagged and taken down to Colt Park for safe removal. All that remained was to get the team back to cover the entrance and make it stock proof. This was carried out on the 1st September. A total of 24 man days was put into the project. Another great example of CNCC actively engaged in conservation.

The project was funded in part from CNCC and the Stories in Stone project.  This scheme has been developed by the Ingleborough Dales Landscape Partnership and is supported by the National Lottery through the Heritage Lottery Fund. Stories in Stone will run from January 2016 to the end of 2019. Go to www.ydmt.org/programme-details-stories-in-stone-16115 for more details.

To see a video of the project go to  https://youtu.be/lmPQWwxFm1c

Maybe you have other projects that could be put forward for funding? 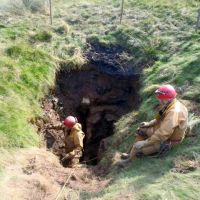 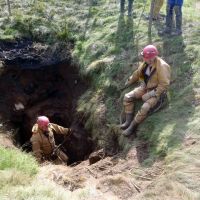 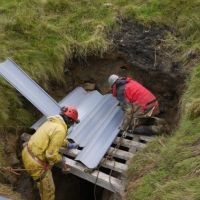 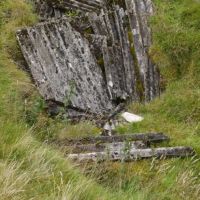 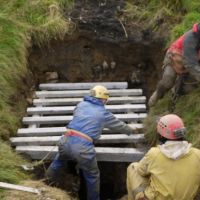 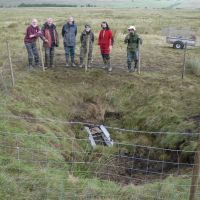